The Buddhas of Bamiyan Valley, Afghanistan

One of the Bamiyan Valley Buddhas prior to its destruction. Image Source: https://ka-perseus-images.s3.amazonaws.com/76e561e498cbcc1ad98a74320c6fbfa7b806fd0f.jpg

The Bamiyan Valley is located along the ancient Silk Road in the central highlands of Afghanistan, surrounded by the Hindu Kush mountain range. The entire Bamiyan Valley holds evidence of ancient Buddhist practices, as stated by UNESCO, but the most notable feature of the area is what remains of the ancient Buddha statues. Carved carefully into their own individual niches during the sixth century, the two giant Buddha statues, measuring 55 and 38 meters high, were a symbol of past Buddhist culture.

According to Bergen (2007),  the towering silent sentinels, which had stood over the Bamiyan Valley for over 1,500 years were destroyed deliberately by the Taliban in March 2001 in an act of cultural vandalism. The statues had previously survived numerous conflicts, such as the ravages of Genghis Khan, and withstood the natural elements for centuries until their destruction was ordered by the Taliban as a part of their campaign to destroy all pre-Islamic artifacts that they considered to be an assault on the Islamic religion.

As discussed in an article in the New York Times, Gall (2006), the United Nations designated the ruins of the Buddhas of Bamiyan Valley as an endangered World Heritage Site in 2003, due to their fragile condition and vulnerability to looters and continued cultural vandalism. 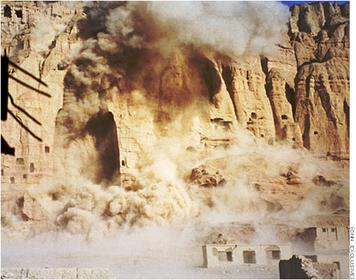 One of the Buddhas during the cultural terrorism attack by the Taliban. Image Source: https://upload.wikimedia.org/wikipedia/en/f/fd/Destruction_of_Buddhas_March_21_2001.jpg

The country of Afghanistan itself has served as a crossroads of cultures for some time, and is reflective of encounters between Islam, Hinduism, Achemenid Persia, Alexandrian Greece, and Buddhism (which is represented in the Bamiyan Valley). UNESCO explains that this unique combination of culture has led to prolonged armed conflict and fanaticism, which has ultimately destroyed a lot of cultural heritage within the country.

The Bamiyan Valley Buddhas are vulnerable to conflict and cultural terrorism/vandalism due to their location and the nature of the conflict in the surrounding areas. The area is technically public property, and the governor of the Bamiyan area has appointed guards to protect the Buddhas and surrounding area from vandalism. The safeguarding of cultural heritage is important because it strengthens the sense of national identity. UNESCO uses this as its strategy to help reestablish links between populations concerned and their cultural history, helping them to develop a sense of common ownership of monuments that represent the cultural identify of different segments of society. One of the Buddhas, before and after its destruction. Image Source: http://hyperallergic.com/wp-content/uploads/2010/04/Bamayan-Buddha.jpg

A continued global issue in regards to archaeological sites is CULTURAL TERRORISM.

According to Cline and Lehr (2014), who wrote an an article for the Antiquities Coalition, the Middle East has been swept by cultural terrorism in the recent years. Terrorists are taking advantage of the political uncertainty and economic hardships these countries are facing, and with each act, cultural heritage is lost. It is difficult to develop a strategy to combat this issue, and simply keeping items in a museum is not good enough. In addition to the destruction of the Bamiyan Valley Buddhas, an Iraq museum was raided during a military battle and seven thousand years of history were lost in the fighting. Cline and Lehr (2014) make a valid point by saying that once these artifacts are removed from their context, we will forever lose the chance to understand the history behind them. 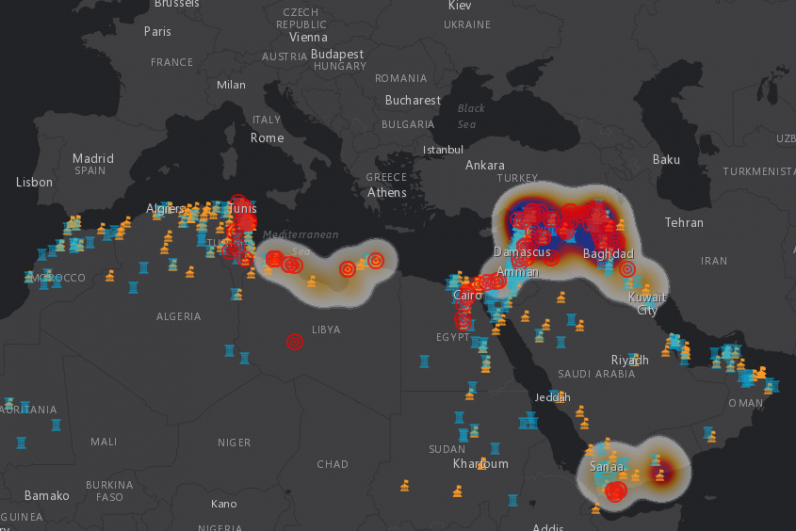 A map of the Middle Eastern countries showing the areas that are threatened / have been harmed by cultural terrorism. Image Source: https://theantiquitiescoalition.org/wp-content/uploads/2016/01/cultural-heritage-destruction-map0122.png

Cultural terrorism is driven in part by INSTABILITY AND CONFLICT in the region.

In an article written by the UiO Department of Archaeology, Conservation and History,  the Middle Eastern region is characterized today by the existence of authoritarian rule, failing social and economic development, and an increasing inequality between rich and poor in many countries. This instability inherently leads to frequent conflict that can cause damages to any vulnerable archaeological sites. This was unfortunately the case for the Bamiyan Valley Buddhas.

But how can archaeology help?

I believe that archaeologists must work side by side with government officials and other people holding power over an area to set regulations regarding endangered archaeological sites. Archaeologists alone cannot protect cultural heritage – they can simply expose it and demonstrate its significance and value. With that being said, archaeologists need to work with others to protect antiques and areas that are important. According to an article from the Society for American Archaeology, archaeological heritage conservation is complex in that it finds itself immersed in a ‘whirlpool’ of contradictions stemming from the political and social issues it touches. Although conservation in itself is a lot of work and takes a lot of involvement, I believe it should be protected at all costs in that if we lose it, it is gone forever.

2016 From Ruins of Afghan Buddhas, a History Grows.