The current Great Mosque of Djenné is not the original one, and was completed in 1907. The first mosque was abandoned around 1829 because Seku Amadu, who had previously conquered Djenné, wanted everyone to attend the same mosque so they could see who did not show up. He let the mosque deteriorate due to lack of upkeep. The mosque was torn down in the 1830s and Amadu built a new mosque in a different spot (Bourgeois 1987:55-56). Djenné was then captured by the French, who took down Amadu’s mosque and built the current Great Mosque of Djenné in the place of the original mosque (Ballantyne 2012, 162).

According to UNESCO, Old Towns of Djenné meet the following two criteria for designation as a World Heritage site:

Old Towns of Djenné fall under criterion (iii) because it shows evidence of pre-Islamic civilizations. There are also artifacts and remains of houses which provide information about technological advances in that area throughout time. The architectural design of the  historical buildings throughout the Old Towns of Djenné lead it to meet criterion (iv). The structure of the buildings have the architectural design of an important period in history. The architecture is similar to that of architecture in Morocco from the late 1500s, and that of the Toucouleur Empire from the mid-1800s. The building’s designs have multiple stories, with buttresses (support beams built against the wall), and draw attention to the building’s entrance with designs (UNESCO 2016).

The main two factors endangering Old Towns of Djenné are urbanization in the area, and erosion of the buildings and soil due to heavy rainfall, flooding, and wind storms (UNESCO 2016:19). The site is also being affected by poor security conditions, civil unrest, issues with waste disposal, and that there is no plan for management and conservation (UNESCO 2016). Aerial view of the Great Mosque of Djenné and the surrounding city. Image Source: http://en.unesco.org/node/262857

The Old Towns of Djenné do not have distinctive borders around them so it is difficult to stop urbanization of the areas from intruding into the towns and archaeological sites. It is also difficult for them to prevent residents of the area from trying to modernize their historical houses and from using improper materials when trying to maintain them (UNESCO 2016:19).

Every year, the people living in the area around the Great Mosque of Djenné would come together to reapply mud on the outside of the mosque to prevent the rain from deteriorating the mosque. In 2006, the Aga Khan Trust for Culture came in to restore the Great Mosque of Djenné and removed most of the layers of mud in the process because the mud made the walls thicker and there was so much mud on the roof, it was at risk of caving in. After the restoration, the town continued their yearly process of reapplying mud to the mosque, but even with the rain can cause the bricks underneath to be uncovered (MacFarquhar 2011).

This video talks about the purpose of apply the mud to the Great Mosque of Djenné and what the process means to the people of Djenné. Video source: https://www.youtube.com/watch?v=3SI5NdNEosE

It is currently difficult to fix the factors endangering the site because there are poor security conditions and civil unrest in the area, which makes it difficult to protect the site and put a plan into effect to deal with these problems (UNESCO 2016). It is also difficult for the residents of the area to maintain the historical buildings in the area because of economic hardship in the area (UNESCO 2016).

The erosion of sites has also been studied by archaeologists, and in the case of buildings made of mud brick, like many are in Djenné, it is very difficult to protect them from erosion. Especially in an area like Djenné, where there are severe wind storms, extreme rain, and flooding to all contribute to erosion of the buildings (Barnard et al. 2016). In the case of soil erosion, archaeologist, Dan Sandweiss, says that archaeological excavation and looting make soil erosion worse because the holes from them fill up with water, instead of the water running off (Curry 2009). 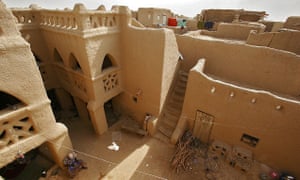 Archaeological research can provide insight to many current global issues, whether it is looking at what causes an issue, could help stop an issue in the past, or just helping people look past the short-term effects of something to its long-term effects. While research at Old Towns of Djenné may not be able to offer direct insight into environmental issues, it could provide insight into one of the effects, erosion. Erosion is causing severe damage to many archaeological sites, especially when there is severe rain or flooding, or when the structures are made of materials, like mud brick, and therefore more prone to erosion. While archaeologists cannot prevent erosion from occurring completely, they can help prevent erosion from destroying a site completely. Research into how to prevent severe effects of erosion at Old Towns of Djenné and other similar sites, like Timbuktu, could also be used to prevent erosion at sites with similar issues. Archaeological research about  the relationship between humans and the environment can also help provide information to helping with general environmental issues today (Sabloff 2008: 49).

Archaeological research at the site of Djenné Djeno could provide information about why the site was abandoned in the 1500s and what caused its decline. This information could provide insight into current actions that could cause the decline of societies and lead to ideas that could prevent their decline. Archaeological research into this site and other sites could help with general sustainability concerns today and how past societies were still successful, even in unideal conditions (Sabloff 2008:54-55).

3 thoughts on “Old Towns of Djenné”